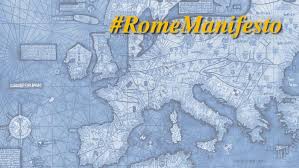 Sixty years after the Treaty of Rome, the European Union (EU) and its Member States are facing major challenges, from Brexit to the threat of Grexit, from the migration crisis to the changing reality transatlantic relations. Much uncertainty however seems to reign on how the EU should move forward. On the one hand the White Paper of the European Commission lacks decisiveness in clearly saying where the EU should be heading. On the other hand, the Rome Declaration of the Leaders of 27 Member States reveals the difficulties to find consensus on the road ahead.

It is in this context that a special attention should be given to the “Rome Manifesto”, an initiative to relaunch the project of European integration which takes inspiration from the celebrated “Ventotene Manifesto”. The initiative – propelled by Villa Vigoni (the German-Italian Center of European Excellence) together with United Europe (an Hamburg-based private organizations promoting European integration) – brought together 18 young European scholars and professionals to draft a document designed to put forward an ambitious proposal for the renewal of the EU. The Manifesto was presented on 23 March 2017 at the German Embassy in Rome in the run-up to the anniversary ceremonies with a high mediatic and political resonance.

The Rome Manifesto is premised on the firm belief that the EU of today is unfit to face the major challenges of our time. Nevertheless, as mentioned in the preamble, the Manifesto is inspired by the conviction that European unity is the best way forward, and that the future of Europe is in people’s hands. Content-wise, the Rome Manifesto, which was written through several intense drafting sessions that took place in Bologna, Berlin and Brussels, is divided into three parts.

The first part is dedicated to recalling the historical and cultural heritage of Europe. As the Manifesto affirms, humanism, the enlightenment, rational and critical thinking have contributed to separating the roles of politics, law and religion within society. Freedom and democracy constitute the foundation of European societies and cannot be unbound from respect for the rule of law. As outcomes of modern European political thinking, liberalism and human rights have provided the ground for the post-war reflection on equality, social justice and peace.

The second part reflects on the European narrative, stating that while European integration has delivered beyond expectation on its promise of peace and prosperity, Europe’s reason d’être is now given for granted and must be reaffirmed on new grounds. Therefore, the Manifesto proposes to put European citizens at the centre again. By renewing the social contract between Europe and its people, while safeguarding the principles of democracy and rule of law, the Union will be devoted to the protection of rights that guarantee European citizens not only peace and prosperity, but also economic, physical, social and environmental security.

The third part of the Manifesto, then, advances a consequential institutional proposal, namely the creation of a new governance-structure designed to simplify Europe’s form of government and improve legitimacy as well as accountability. As the Manifesto claims, only an institutional regime endowed with clearly defined competences, and legitimated through appropriate democratic processes, will win the support of European citizens. To this end, the Manifesto pleads for the creation of a Federal Union, that is a system with clear separations of powers, vertically between the Union and its member states, and horizontally between the institutions of the Union itself.

The Manifesto, therefore, outlines the framework of a new constitutional architecture for a European Federal Union based on separation of powers, and advanced a model to do so. Vertical separation of powers will be achieved by neatly dividing the competences of the Union and the competences of the member states. Sovereignty will be divided between the Union and its member states according to the principle of subsidiarity. The Union shall have competence in foreign affairs and immigration, counter-terrorism and defence, the internal market, competition and trade. It will have a common currency and a fiscal policy designed to ensure the proper functioning of the economic and monetary union. The Union shall not be a super-state and it will refrain from overly intrusive regulation. Any competence which is not explicitly delegated to the Union shall remain with the member states. The Federal Union will have a reasonable budget financed through taxation and not through transfers from member states’ budgets.

Horizontal separation of powers will be achieved by clearly distinguishing the functions of the various Union institutions. As required by principles of constitutionalism, the institutional system of the Federal Union will be based on a legislative, an executive and a judicial power. The legislative power will be divided between the European Parliament and a European Senate – which will result from the merging of the current European Council and the Council. The executive power will be vested in a European President elected through a democratic process. The President will represent the Union in international affairs and head the European administration evolved from the current European Commission. The judicial power will be exercised by the European Court of Justice, which shall be entitled to review Union legislative and administrative acts for compliance with the separation of powers and the existing Charter of Fundamental Rights.

Beyond the articulation of a thought-through institutional model for Europe’s Federal Union, however, the Manifesto also suggests a pathway that could be considered by institutional actors to set up such a system. In particular, the Manifesto invites national parliaments to appoint at the earliest state delegates who shall meet in Rome in 2017 to draw up a constitution of the Federal Union defining in clear and binding terms the powers and governance structure of the Union. Moreover, the Manifesto proposes that this constitution shall enter into force when a majority of today’s EU Member States have ratified it through a procedure specifically designated for this purpose. Countries which do not ratify the constitution will not be members of the Federal Union, but they will be associated as closely as possible.

At a time when the future of Europe is uncertain and repeated calls are made at the highest institutional level to re-launch the Union project through forms of multi-speed integration, the Rome Manifesto offers a road-map to be considered for establishing a Federal Union among those European countries which are willing to do so. While the proposal is ambitious it is not unprecedented. In fact, the Rome Manifesto used as a template the example of the Philadelphia Convention of 1787, and the Conference of Messina of 1955. As those successful models show, grand political vision combined with cleaver technical solutions are the indispensable ingredients for success at constitution-making moments. By proposing a new institutional architecture for the Union and the way to accomplish it, the initiative of the Rome Manifesto aspires to gather growing support to re-open the debate on the constitutional future of Europe.

This article was first published as CSF-comment no. 105 on 30 March 2017 in: http://www.csfederalismo.it/it/pubblicazioni/commenti/1265-the-rome-manifesto-an-initiative-to-re-launch-the-project-of-european-integration.